By: luke | No Comments 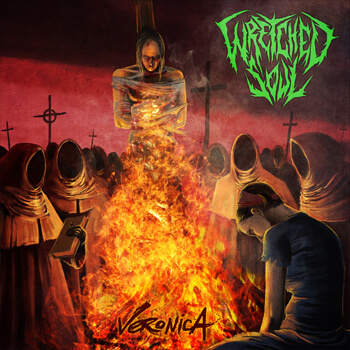 Recorded and Produced by Chris Tsangarides

“A rising star in the underground thrash metal scene.”

“This is varied music which should have a wider appeal outside the thrash metal confines.”

“Wretched Soul are taking the best of 80’s classic thrash and giving it a kick up the arse, sending it to the future in a blaze of fury. Part death metal, part black metal, part classic metal, it works incredibly well. 9 out of 10”

“A blend of death, thrash and trad metal that’s difficult to categorise but easy to bang your head to. Both brutal and melodic this is a promising debut effort.”

“Destined to be an essential part of anyone’s metal collection…A powerful statement from a young band to watch out for. 9 out of 10”

“Wretched Soul mix up Death, Thrash and Traditional Metal into something altogether new.”

“Bold, brash, fast-paced, mesmerising and superb. I never thought the genres could have been melded so perfectly, but ‘Wretched Soul’ have managed it to aplomb…A newly created masterpiece of face melting metal. 9 out of 10”

Andrew Mayes – Eyes From The Moshpit

“Wretched Soul have released a very convincing debut album that will please fans of all the genres mentioned and it bodes very well for the future…they’ve managed to carve their own little niche in the market! With the amount of bands around these days that’s not an easy thing to do!”

“Veronica’ offers a consistent quality over its eight songs and almost perfect running time of forty minutes…on repeated spins I can honestly see why these guys are starting to make a name for themselves.”

“Over 40 minutes of non-stop, top quality music that switches styles in the blink of an eye, yet always in a fluid manner that transcends their debut status…It’s an impressive statement.”

“These guys have taken elements of death metal, some thrash metal and mixed it all up on here. The production is punchy and gives everything plenty of room to breathe and nothing is overpowering. A killer release. 9 out of 10”

“Like all traditional heavy metal since, well, forever, there is something so gloriously over-the-top about Veronica that, if you’re a fan of anything pre-1987, will be a musical orgasm for your ears.”

“What you have here, essentially, is a very impressive album 4 out of 5”

“It’s a compliment to Wretched Soul that their sound is one so hard to pin down…A very impressive work from an extremely talented bunch. 8/10”

“This is a great debut album – definitely a band worth listening to. 8 out of 10”

“Masterfully created thrash infused punishing death metal grabbing you by the jugular as its mix of vicious guitar riffs are augmented by Chris Simmons’ ever changing vocal mix. 4 out of 5”

“It’s been a long time coming but England is once again starting to produce bands that can be worthy of inheriting the greatness of their predecessors – and Wretched Soul is one of them without a shadow of a doubt.”

“Vocalist Christopher Adam Simmons provides the contemporary edge with a roar drawn directly from the combustible bowels of Hell itself, treating the tightly packed stage as if it was one from an arena such as the O2, stalking the well trodden boards for the whole set. It’s the songs that do the business tonight through, their old school feel lapped up and spat back by the most active crowd of the night.”

“All of the songs display tight musicianship and have excellent tunes, so if thrash is your thing, this is highly recommended.”

“The modern Death Thrashers krank up the gears to release an album that speaks speed and delivers a brutally powerful tone. If you’re not a fan of either A. Death Metal, B. Thrash Metal or C. Metal, then you are missing out On what could be regarded as debutant album of the year. 10 out of 10.”

“Wretched Soul supply and all encompassing Metal assault of unparalleled proportions. When we talk about bands to watch and who are going to make a big impact of the metal scene, you’ve got to mention Wretched Soul”