Wretched Soul confirmed for –the UK’s No.1 Metal Festival– Bloodstock Open Air and will be performing on the Sophie Lancaster Stage, Sunday August 13th.  Guitarist Steve Clifford writes “We are absolutely thrilled and honoured to announce that The Ghost Road has led us back to the hallowed grounds of Bloodstock 2017. As you all already […]

Wretched Soul are set to join veteran Norwegian death-dealers, Blood Red Throne for a 7 date UK Tour this April in support of the Canterbury Quartet’s newest release, The Ghost Road. Songs from the savage sophomore album –released to critical acclaim in December 2016 through UKEM Records– will be highlighted on this second UK run since the album’s […]

The Ghost Road – Out Now!

The sophomore record from Wretched Soul is out now on UKEM Records! Touring in support of the new record starts December 2nd, latest dates can be found at wretchedsoul.net…   PRESS “MAIDEN MEETS IMMORTAL EPIC” – Terrorizer #278 “…a true synthesis of sub-genres, the listen is rewarding and revelatory.” – Terrorizer #278 “A glossy Thrash masterpiece” – […]

Having laid waste to myriad UK festivals this year –including critically-acclaimed performances at Eradication and Wildfire–: the time has finally come to announce the first handful of live dates in support of our forthcoming new record, The Ghost Road. Coinciding with the album’s December 2nd release date and continuing throughout 2017, the tour will showcase and […]

‘The Ghost Road’ Shirt/CD-Digi Pack/Sticker packages are now available to pre-order direct from UKEM Records. Packages deals are extremely limited so don’t miss out! Shirts available up to 3XL, full colour front print featuring ‘The Ghost Road’ cover at by Dan Goldsworthy and back print reading “WE’LL BLEED YOUR SOUL…” If you haven’t heard the […] 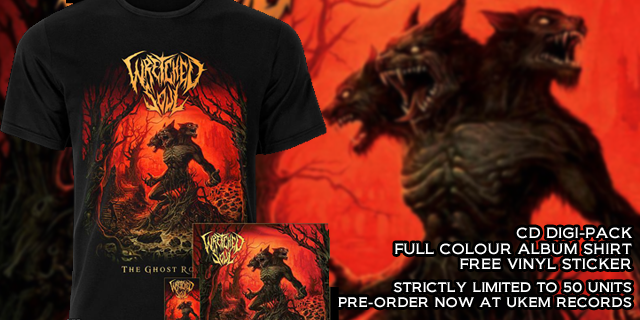